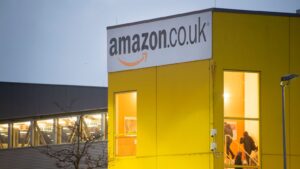 Amazon is to create 7,000 new permanent UK jobs by the end of the year, the online retail giant has announced.

Amazon said it had also taken on thousands of people whose jobs were affected by the coronavirus crisis – and many will now move into the new permanent positions.

It comes after Tesco said it would add 16,000 new roles as it benefits from a surge in online demand – in contrast to the gloom facing the high street with shop vacancies now at their highest level for six years.

Amazon’s announcement was welcomed by Alok Sharma, the business secretary.

“While this has been a challenging time for many businesses, it is hugely encouraging to see Amazon creating 10,000 jobs in the UK this year,” he said.

The firm’s recruitment drive will take its permanent UK workforce to more than 40,000.

It has also already started recruiting 20,000 seasonal positions for the Christmas rush.

The company, which has faced criticism over workplace conditions at its warehouses, said pay would start at £9.50 an hour across the country and £10.50 in London.

Amazon said the 7,000 new jobs would be added at more than 50 sites, including corporate offices and fulfilment centres.

They will include people handling customer orders, as well as engineers and human resources and IT roles.

It said many of the jobs would be created at state-of-the-art centres in Darlington in County Durham and Sutton-in-Ashfield in Nottinghamshire, with each accounting for 1,000 roles.

The Darlington site began operating in May and the other two will launch later this autumn.

Stefano Perego, Amazon’s vice president of European customer fulfilment, said: “Our people have played a critical role in serving customers in these unprecedented times and the new roles will help us continue to meet customer demand and support small and medium sized businesses selling on Amazon.”