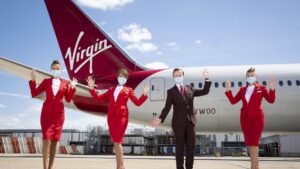 Virgin Atlantic is stepping up its post-lockdown flight schedule after the High Court cleared a £1.2 billion recapitalisation of the airline in which scores of creditors have accepted a loss of 20 per cent of the money they are owed.

While the intercontinental carrier — the only UK-based long-haul operator after British Airways — plans to be flying to 11 locations by the end of the month, it will, like its rivals, continue to be crippled on its lucrative transatlantic routes.

Virgin is already flying daily to New York and Los Angeles and three times a week to Miami. It plans to start services to Atlanta in a few weeks’ time, but the restrictions on entry into the United States are strict. Britons cannot fly there if they have been in the UK, Ireland or continental Europe for the previous 14 days — and even if they are eligible, they face a fortnight of quarantine at the other end.

Virgin Atlantic was founded by Sir Richard Branson in 1984. Since 2012 it has been 49 per cent-owned by Delta Air Lines, one of America’s so-called Big Three. In recent years it has been flying about five million passengers a year on its fleet of 37 aircraft, making it about one eighth the size of BA.

The airline was on course to run out of cash this month. It had teetered on the brink of bankruptcy during the depths of the pandemic, when aircraft around the world were grounded, and was refused a government bailout.

The company laid off 3,500 staff, more than a third of its workforce, and quit Gatwick airport to retrench at Heathrow and Manchester to help to save £280 million a year. Sir Richard’s Virgin Group sold shares in its Virgin Galactic space venture and has pumped £200 million in cash into the airline.

Virgin Group and Delta have waived £400 million of shareholder payments due. Creditor waivers and deferrals are worth another £450 million, while Davidson Kempner, the American hedge fund, has put up £170 million of debt finance.

The final step in the refinancing comes today, when the US courts are expected to rubber-stamp the High Court’s clearance.

A spokesman for Virgin Atlantic said: “Achieving this significant milestone puts Virgin Atlantic in a position to rebuild its balance sheet, restore customer confidence and welcome passengers back to the skies, safely, as soon as they are ready to travel.”