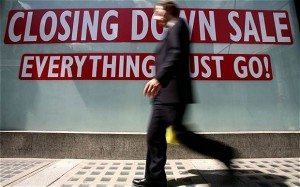 The number of empty shops on UK high streets has risen to its highest level in six years as city centres, and especially London, suffer from a dive in visitor numbers.

Nearly 11% of shops remained vacant in July compared with 9.8% in January, with the number of empty premises rising in six out of 10 UK regions, according to retail analysis firm Springboard. Greater London suffered by far the worst blow, with empty shops increasing by nearly two-thirds.

The rise in shut-up shops comes as the number of visitors to large city centres continues to drop.High streets, including city centres, saw nearly 40% fewer visitors in August compared with the same month last year, according to Springboard.

“The reality of the new normal has already started to bite,” said Diane Wehrle, insights director at Springboard. “This result brings into sharp focus the difficulties faced by large cities in attracting customers back and the impact of this on our bricks and mortar retail landscape.”

She said retail parks had fared better, with visitor numbers down by just over 11% last month, while market and coastal towns had also performed better than cities as they benefited from the staycation trend. The number of visitors to seaside towns dropped by 24% and market towns saw a drop of almost 27% in footfall.

Mark Robinson, chair of the High Streets Task Force, said the changes were likely to lead to the rise of multifunctional town centres, with empty shops being given over to other productive uses. “The pandemic has brought forward changes that usually take years to occur; instead of ‘How long is the commute?’, people are asking, ‘Do I live within walking distance of the services I need – like food, green space, healthcare, schools and childcare?’” he said.

But retailers, cafes and restaurants are struggling to adapt to a huge shift in behaviour during the pandemic as more people work from home or have been forced to take a long break under the government-backed job protection scheme.

Major chains including Marks & Spencer, Debenhams, John Lewis, Pret a Manger and Pizza Express are all closing outlets and laying off thousands of staff. In contrast, some local high streets and independent stores have traded well as those working from home do their shopping and socialising near where they live.

The head of the Confederation of British Industry has warned that city centres could become “ghost towns” if the prime minister does not do more to encourage workers back to the office.

Wehrle said: “It is clear that footfall has only been marginally boosted by the government support initiatives, and the Office for National Statistics have reported that non-food spending remains lower than in February 2020. With the news this month of the UK officially going into recession and the impending end to the furlough scheme in two months, which is likely to see unemployment levels rise, it appears that the retail sector is standing at the edge of a trading precipice.”