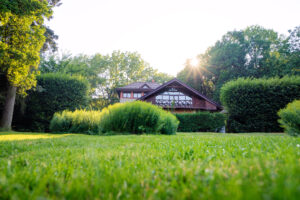 A good internet connection and access to green spaces are becoming bigger priorities for homeowners and renters in the wake of the Covid-19 pandemic, a survey has found.

The public’s preferences for their living arrangements are changing after their experiences during the lockdown, which meant that people spent more time in their homes and has caused a seismic shift to remote working.

In a poll carried out by Ipsos Mori for St Modwen, the FTSE 250 property developer, 49 per cent of respondents said that reliable internet access had become more important to them. The same proportion said that they were also increasingly prioritising living near green spaces.

The results come as the property market enjoys a revival after the easing of national lockdown restrictions, which has led to pent-up demand after the government temporarily froze house viewings to stop the spread of the disease.

However, the housing market rebound could prove to be short-lived and may even falter if unemployment rises later in the year as the economic fallout from the Covid-19 downturn begins to be felt.

Ipsos Mori surveyed 2,482 people between June 19 and June 23. It found that 23 per cent of private renters were unhappy with their homes, compared with only 10 per cent of owners. Twenty-eight per cent of younger respondents — who are part of the so-called Generation Z of 16 to 24-year-olds — said that their accommodation had not been suitable for their needs during lockdown.

Renters also found it harder to work at home during the pandemic. While half of homeowners had access to private space to facilitate their remote working, this fell to 32 per cent for tenants.

Forty-nine per cent of respondents said that they wanted to live away from town and city centres, compared with 31 per cent who preferred to be closer.

Roy Hudson, interim chief executive of St Modwen, said that “Covid-19 is undeniably impacting the way we live out our lives. From light and airy homes to fast internet connections, the wish-lists for our homes have already shifted and we only expect this to continue.”