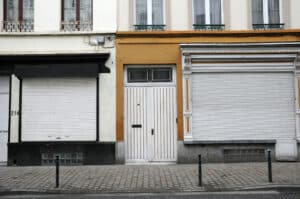 The fall in the workforce using town and city office blocks took its toll on the retail sector last month, as the number of people going shopping plunged by more than a third compared with the same month last year.

The 34.8 per cent slump in shopper numbers recorded by the British Retail Consortium was only a 7.3 percentage point increase on July and remained below the average decline of 27.6 per cent over the past 12 months.

Footfall on the high street was even worse, falling by 41.7 per cent year-on-year, as the popularity of working from home continued. For the first time since April 2018 high streets fell below shopping centres, where visitor numbers were down 37.4 per cent.

According to the BRC’s Shopper Trak Monitor, the best-performing sector was retail parks, where the number of shoppers fell by a more modest 11.1 per cent. A higher proportion of supermarkets and larger stores is said to have helped to shelter retail parks from a steeper decline.

Helen Dickinson, 53, chief executive of the BRC, said: “In-store discounting and demand for schoolwear helped to lure some customers back to the shops, but, with many office blocks still empty and much of the public avoiding public transport, footfall is not returning to towns and city centres and this is having a devastating effect on the local economies in these areas.”

A more positive note was struck by the Office for National Statistics, which found that more people were coming into the office, for at least part of the working week. Last week about 20 per cent of adults said that they were working exclusively from home, down from 38 per cent in June.

Over the past two months, the proportion of people surveyed saying that they were doing all their work at home has fallen steadily. Last week, the ratio who travelled to work reached 57 per cent, according to the ONS.