Costa to cut 1,650 staff in slump on high street 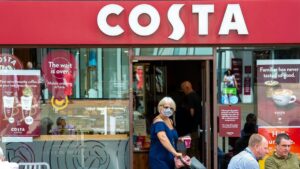 Costa Coffee has announced up to 1,650 redundancies after becoming the latest high street business to be hit by the dearth of city centre shoppers.

Britain’s biggest coffee shop operator, which is owned by Coca-Cola, said that the continuing impact of the coronavirus slump had required it to make “difficult decisions to ensure that as many jobs as possible are protected long-term”.

The news comes a week after Pret A Manger revealed plans to cut almost 2,900 jobs as the reluctance of workers to return to the office, particularly in London, continued to take its toll on the sandwich chain’s sales.

While Pret is closing 30 branches as part of its workforce reduction, Costa has made no specific mention of shop closures, saying only: “In terms of store closures, we open new stores, renovate stores and close stores throughout the year as part of our operating business.”

Costa was founded in 1971 by Sergio and Bruno Costa, two Italian brothers. It has a presence in 31 markets, with more than 2,700 shops throughout the UK and Ireland and about 1,200 overseas. In 2011 it acquired Coffee Nation, since rebranded as Costa Express, which has more than 10,000 coffee machines in shops, offices and service stations.

For many years it was owned by Whitbread, the Premier Inn operator, but in January last year the FTSE 100 leisure group bowed to mounting pressure and sold the chain to Coca-Cola for £3.9 billion, significantly above market forecasts.

Costa employs 16,000 people across its 1,600 wholly owned UK stores, which means that about 10 per cent of its staff are at risk of losing their jobs. The 1,650 roles under threat, all store-based, do not affect the 1,100 Costa franchise stores across the UK employing a further 10,500 workers.

Neil Lake, 41, managing director of Costa Coffee UK and Ireland, said: “Our baristas are the heart of the Costa business and I am truly sorry that many now face uncertainty.

“We have had to make these difficult decisions to protect the business and ensure we safeguard as many jobs as possible for our 16,000 team members, whilst emerging stronger ready for future growth.”

During lockdown, Costa closed almost all its British stores for six weeks, with employees being put on furlough for twelve weeks. It started reopening in May and more than 2,400 are now trading.

Its stores received a boost from the cut in VAT and from last month’s Eat Out to Help Out scheme, but the company said that there remained “high levels of uncertainty as to when trade will recover to pre-Covid levels”. It recently froze all pay increases for support centre staff and cut all non-essential expenditure.

The 1,650 roles at risk of redundancy will be subject to a consultation process and Costa said that it would try to find alternative roles within the business for as many as possible. Those leaving would be given support in seeking a new job.

Other food and drink chains to have suffered from the high street malaise include Wasabi and Itsu, the sushi operators, both of which have gone through company voluntary arrangements in a bid to ensure their survival.