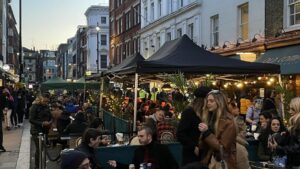 The FTSE 100 rose above 7,000 this morning for the first time since the end of last February, shortly after the pandemic triggered sharp falls in global stock markets.

The index rose for the fourth session in a row, adding another 46.02 points, or 0.7 per cent, to reach 7,029.52. It was led higher once again by its travel, banking and mining companies, which have been revitalised over winter in anticipation of a sharp bounceback in the global economy.

Ivan Sedgwick, investment director at the boutique finance house LGB & Co, said: “With the FTSE’s big weighting in resource stocks and financials, and its exposure to old economy companies, it isn’t surprising that it has benefited from the expected economic recovery we’re already seeing signs of as the vaccines have their effect.”

WH Smith topped the City leaderboard after the stock was upgraded to “buy” by analysts at the Canadian investment bank RBC. They think that there is “significant pent-up demand” for travel, which bodes well for WH Smith given that the bulk of its profits come from its airport and railway station shops. Added to that, RBC thinks that its traditional high street business has “proved more resilient” than they initially thought. The shares rose 76½p, or 4.2 per cent, to £19.10.

The car parts maker TI Fluid Systems fell 17½p, or 5.7 per cent, to 290½p after its largest shareholder the US private equity group Bain Capital dumped a £146 million stake. TI Fluids’ chief executive Bill Kozyra, who is stepping down later this year, also sold £1.1 million of his shares in the company.