The billionaire Issa brothers who recently bought Asda for £6.8billion are poised to make a takeover bid for struggling Caffe Nero after buying up the company’s debt.

Mohsin, 49, and Zuber Issa, 48, could be due to take control of the coffee chain after purchasing around £140million in loans from Swiss private equity firm Partners Group via investment bank Morgan Stanley, the Sunday Telegraph reports.

Buying up the debt pile puts the Issa brothers in a strong position for takeover if Caffe Nero defaults on the £145million of senior ranking debts due to be repaid in 2022.

City sources told the Sunday Telegraph that Partners Group had written to Caffe Nero’s boss Gerry Ford, 62, on Friday over concerns that the company may breach banking covenants – the restrictions laid out in a lending agreement.

The Issa brothers, who purchased fast-food chain Leon for between £80million and £100million in the early hours of yesterday, have been in a long-running battle to buy the Caffè Nero coffee shop chain.

Leon is the latest acquisition in a buying spree that has seen the brothers hoover up petrol forecourt and roadside service chains around the world and even consider buying Topshop.

The brothers, whose parents came to Britain from India ‘with nothing’, built EG Group from one petrol station bought for £150,000 in 2001 into a £9billion giant employing 44,000 staff.

The pair are now worth an estimated £3.56bn, including a £25m Kensington townhouse and a private jet that is kept in a hangar at Blackpool Airport alongside Donald Trump’s personal helicopter.

Caffe Nero, like its rivals such as Pret a Manger, has been heavily impacted by the reduced footfall in city centres as millions of Britons work from home. 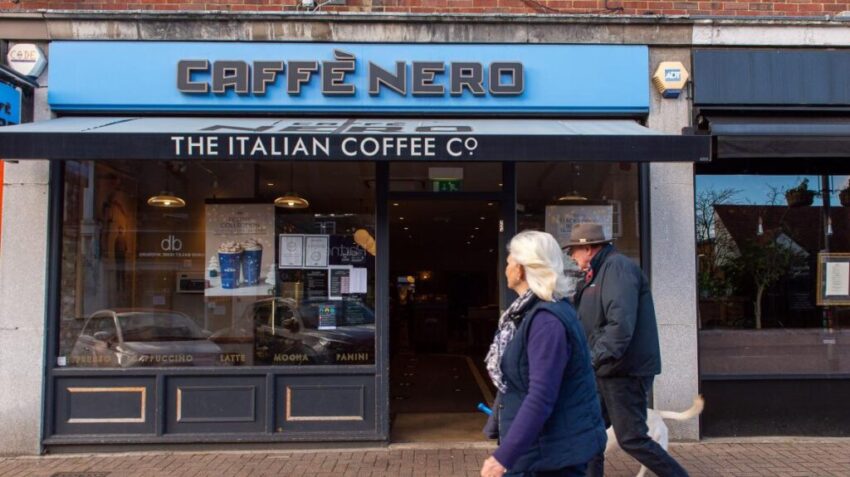 In November Caffe Nero was forced to put itself into a Company Voluntary Arrangement, a type of insolvency that allows firms to continue trading while they attempt to get their finances in order.

Just hours before Caffe Nero’s creditors and landlords were set to vote on the company’s insolvency plan the billionaire Issa brothers made a bid to take over the coffee chain, Sky News reported. The buyout deal was rejected.

Founder Mr Ford, who set up the business in 1997, said the second lockdown had pushed the company to act as he appointed leading accountants KPMG to advise on the CVA last year.

Mr Ford said in November: ‘Like so many businesses in the hospitality sector, the pandemic has decimated trading, and although we had made significant progress in navigating the financial challenges of the first lockdown, the second lockdown has made it imperative that we take further action.’

The chain has suffered from curbs on socialising, fewer shoppers in town centres and the government advice for workers to stay away from their offices.

The company operate 800 stores across the UK and employ more than 6,000 people.

Caffe Nero is said to have been performing strongly prior to the pandemic.

A spokesman for Caffe Nero said: ‘We have had a successful winter and spring trading and are generating positive cash flow and are ahead of forecast for the last five months.

‘We are forecasting no covenant issues in our projections over the next 12 months and we look forward to an even brighter future post May 17th when we open up our cafes fully to the public.’

A spokesman for the EG Group would not confirm if Morgan Stanley was acting on behalf of Mohsin and Zuber Issa by becoming assigned Cafe Nero’s debt in a sub-participation from Partner Group.