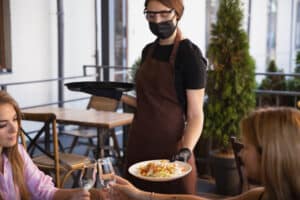 Business leaders have warned that thousands of jobs are at risk because of the government’s “illogical” decision to close pubs, bars, restaurants and hotels across London in response to surging coronavirus cases.

In a move described as “another nail in the coffin” by the pubs trade body, at least 15,489 venues in the capital, as well as parts of Essex and Hertfordshire, will be moved into tier 3 from Wednesday.

They will join a list of 35,742 that are already effectively closed in areas such as Greater Manchester, Kent, the east Midlands and parts of Yorkshire. The change means more than 53% of English hospitality venues will be unable to offer anything except takeaway and delivery.

Kate Nicholls, the chief executive of the trade body UK Hospitality, said: “So many pubs, restaurants, bars, cafes and hotels, having invested so much to make their venues safe, are only just clinging on by the skin of their teeth but will be forced to take another huge hit.

“The burden of a region being moved into tier 3 falls almost exclusively on hospitality businesses. It is an illogical tactic that fails to tackle Covid effectively but does push businesses closer towards failure.”

She said there was no hard evidence that hospitality was a source of outbreaks, pointing to schools as a more significant vector of disease.

She also called for Manchester, Leeds and Birmingham to be moved back into tier 2.

A formal review of regional tiers is due to be announced on Wednesday, which could result in venues outside London moving into tier 2, allowing them to serve people from the same household.

Eddie Curzon, the London director of the business lobby group the CBI, said: “Businesses in London understand that rising infection rates must be controlled, and tougher restrictions are necessary to save lives and protect against longer-term economic scarring.

“However, the financial impact of moving London into tier 3 will be stark. Businesses – particularly those in sectors like retail and hospitality – will have been counting on a festive fillip to help mitigate months of hardship, and further restrictions now will come as a devastating blow. Thousands of jobs and livelihoods could be at risk.

“It’s vital that any tightening of measures anywhere across England is shaped by clear evidence, consistently applied, and accompanied by increased support for businesses in the worst-hit sectors.”

The British Beer and Pub Association (BBPA) said 1,250 of London’s 3,680 pubs that remained open under tier 2 rules would now have to close.

The BBPA’s chief executive, Emma McClarkin, said: “Moving into tier 3 is another nail in the coffin for London’s pubs, as well as those affected in parts of Hertfordshire and Essex.

“It could completely destroy many pubs […] who have taken bookings for the lead-up to Christmas and New Year’s Eve if the tiers don’t change before then.”

The BBPA predicted this would put 8,000 jobs at risk, on top of 56,000 already under threat in the capital’s pub sector.

The BBPA also hit out, via Twitter, at the fact that shops and shopping centres are able to stay open.

Tier 3 is another nail in the coffin for London’s pubs.

1,250 pubs who remained open in London in tier 2 will close.

Pubs are amongst the lowest places for transmission. Yet they close whilst shops and shopping centres stay open.https://t.co/AOZ720QChX

Nick Mackenzie, the chief executive of the pub chain Greene King, said introducing the measures shortly before Christmas would “further cripple the pub sector, which is already on its knees”, amid fears December trade will plummet 90%.

The restaurant sector will be also be hard hit by London moving into tier 3. The capital has 7,569 restaurants, about 28% of the total in England, not counting those in Essex and Hertfordshire that will also be affected.

That means more than six out of 10 restaurants in England will be closed as of 12.01am on Wednesday morning.

The London Chamber of Commerce and Industry said financial support for the capital’s hospitality sector from the government should be “sufficient and immediate”.

The chief executive, Richard Burge, said: “This must include – as a minimum – instant cash support to enterprises in hospitality and leisure, and extension of the business rates holiday into the next financial year – which will help the whole of the high street to plan their outgoings and mitigate the impact of loss of trade due to restrictions deterring those outside London from travelling in.”

Retailers also expressed concern over the tier 3 move after the health secretary, Matt Hancock, advised the public against travelling into London to do their Christmas shopping. Non-essential retailers remain open under tier 3 restrictions.

London retailers said the tier 3 measures would add to the pain of businesses already suffering from the absence of tourists and the shift to working from home. Shopper numbers in the capital are down more than a third compared with last year.

Jace Tyrrell, the chief executive of trade body New West End Company, said: “We all recognise that the safety of the public is of paramount importance, and action must be taken to ensure that the infection rate remains low, but these stop-start measures are worsening an already catastrophic situation. However well telegraphed, today’s announcement comes as a hammer blow to the West End’s restaurants and hotels. Advising against travel will heap further pressure on retailers that have invested millions in enhanced safety measures and staff training to support trade.”