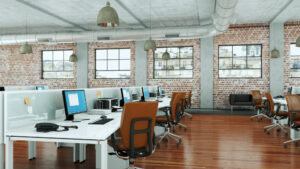 UK businesses could save a combined £481m in business rates after an interim ruling over rebates.

Offices which appealed their rates bills can have a 25% rebate, said the Valuation Office Agency, which issues the bills for business premises.

But offices were billed as normal. Many have appealed, as they lay empty as workers were urged to work from home.

The volume of appeals led to an interim agreement for a quarter off the bills, after weeks of negotiations.

Robert Hayton, head of property tax at Altus Group, Britain’s largest ratings advisory, said: “The interim settlement paves the way for an initial rebate worth up to £481m for the office sector.”

Controversially, supermarkets were included in businesses let off business rates, although Tesco, Morrisons, Sainsbury’s, Aldi and Lidl have all agreed to repay a total of £1.9bn after criticism from MPs.

A Valuation Office Agency spokeswoman said that discussions were still ongoing, and no formal decision has been made.

She added: “Understanding the impact of the ongoing pandemic on rateable values is a complex legal and valuation issue. We are working to resolve these cases as quickly and efficiently as we can.”