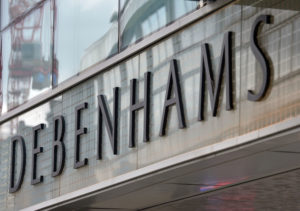 Debenhams’ flagship Oxford Street store in London and five other branches will not reopen after the current coronavirus lockdown.

The department store chain, which is being wound down, said shops in Portsmouth, Staines, Harrogate, Weymouth and Worcester would also shut permanently.

As a result, 320 staff – including 140 at Oxford Street – who are currently furloughed will be made redundant.

The beleaguered retailer, which traces its roots back 243 years and started trading as a drapery and haberdasher from a shop near its Oxford Street store, entered liquidation at the start of December after the JD Sports chain walked away from rescue talks.

Debenhams had hoped to reopen its Oxford Street branch to finish selling off stock, but the retailer said it had been unable to extend its lease, which ends on 17 February. The company said it expected lockdown measures to remain in place until at least March, meaning Oxford Street would not be able to reopen.

Debenhams intends to reopen as many stores as possible after the lockdown to complete the liquidation of its remaining stock. In the meantime, its closing down sale continues online.

Geoff Rowley, a joint administrator to Debenhams at FRP Advisory, said: “We continue to engage with interested parties over alternative proposals for the future of Debenhams, but inevitably the latest lockdown has had an effect on our plans for the wind-down of the business. We regret the impact on those colleagues affected by today’s announcement and would like to thank all those who continue to keep the business trading in very difficult circumstances.”

The permanent closure of the Oxford Street branch is a further blow for the popular shopping street in central London, after the announcement earlier in January that the building that housed the flagship Topshop store is up for sale after the brand’s owner, Arcadia, collapsed into administration.