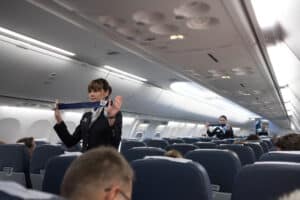 A fresh row over the Welsh language has erupted after travel experts claimed flight safety was being put at risk by new mandatory announcements for pilots landing in Wales.

A Notice to Airmen (Notam), due to last until the end of the month, directs pilots to make a 143-word announcement about Covid in English, Welsh and an officially recognised language of the departure country before landing in Wales.

Critics have claimed it is the latest example of the “overload” of notices pilots have to digest before a flight which could distract them from crucial safety information.

A pilot is generally expected to absorb around 100 pages of Notam information before a long-haul flight, but the most critical details would only fill around three of these pages, said Mark Zee, a former pilot and air traffic controller.

There is, however, “no prioritisation” within the briefing which clearly singles out the most important information, meaning it can be lost in a sea of irrelevant points, he claimed.

An Air Canada flight narrowly avoided catastrophe in 2017 when pilots missed a notice saying the runway in San Francisco was closed – on page eight of a 27-page document.

It has led the International Civil Aviation Organisation (ICAO), which represents 193 countries, to recently launch a global campaign calling for a “significant reduction” in the number of unnecessary Notams plaguing air travel.

Simon Calder, the travel writer, provoked a furious response for suggesting the new mandatory Welsh language announcement was an example of “yet more guff for airmen and women to wade through”.

He claimed national languages should be respected and used, but the burden of communicating these notices should be given to airline managers, rather than pilots.

Bethan Sayed, a Plaid Cymru member of the Welsh Parliament, was among those to hit back angrily at Mr Calder’s suggestion.

She said: “Wow. I thought you were well travelled? If so you’d know that different languages are spoken the world over. Would you say this if travelling to French-speaking Quebec I wonder?”

Yes Cymru, the campaign for an independent Wales, also condemned the comments, saying it “thought the whole point of travelling was to have different experiences”.

But aviation experts agreed that the mandatory Welsh announcement did reflect the broader problem posed by excessive notices for pilots.

Mr Zee, who has campaigned for years to slash the size of the briefings pilots have to digest, told The Daily Telegraph: “It is perfectly correct, it’s just an unfortunate example because if you’re going to chose mandatory Welsh language announcements as one of the Notams then you’re opening up a different can of worms.

“This is one of those thousands of Notams that exist at the moment that are very by the way and they don’t have an operational impact on the aircraft.”

David Kaminski-Morrow, the air transport editor of FlightGlobal, added: “While I don’t think complying with the (Welsh language) Notam constitutes a distracting flight hazard – off the top of my head, I’d argue it could just simply be spoken or read off a card after the aircraft stops – I’d suggest this is a prime example of Notam clutter.