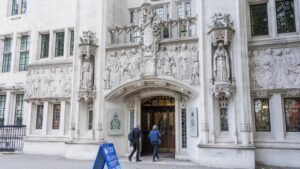 The legal battle over business interruption policies that did not pay out to small firms during the pandemic will edge towards its climax today when appeals are heard by the Supreme Court.

Thousands of small businesses were thrown into turmoil when they tried to claim for financial losses suffered as a result of coronavirus restrictions but were rejected by their insurers.

This led to a number of high-profile disputes between businesses and insurance companies, with fears that some small firms will not survive the pandemic without payouts.

The Financial Conduct Authority sought to resolve the controversy by fast-tracking a test case to the High Court on behalf of policyholders. The City regulator estimated in the summer that as many as 370,000 businesses could be affected by the outcome.

In September the FCA said the High Court had “substantially found in favour” of arguments that the regulator had presented for policyholders. Yet most of the insurers involved in the case, the FCA and a group of policyholders are appealing against various aspects of the judgment. The Supreme Court is holding a four-day hearing to decide on these arguments.

When the Supreme Court comes back with its judgment at a later date it is expected to provide clarity on which policies should pay out. There are fears, however, that the resolution will come too late for some small businesses that will have already collapsed because of the pandemic.