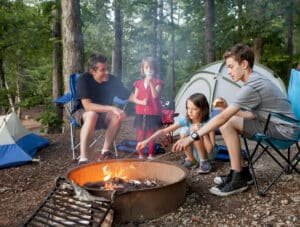 Life in lockdown during the spring was antisocial, lazy and marked by heavy drinking but it did at least leave Britons with one healthy habit: camping.

A survey by the Office for National Statistics of the changing habits of British households from before, during and after the first lockdown shows that the restrictions left people aching to see friends, tend gardens and go camping.

During late March and April, people had 18 minutes more sleep a day, spent two hours 54 minutes in front of the TV, did 39 minutes gardening — more than twice as much as before the pandemic — and drank 20 per cent more alcohol than usual.

Some behaviours have lingered, such as working from home and gardening, but data for September and October showed that people had cut down on drink, were socialising more, watching 26 minutes less of TV a day and, if parents, working harder than ever.

Will Tanner, director of the think tank Onward, said: “The ONS has exploded the myth that we all spent our lockdowns getting fit and working harder. We seem to have watched lots more TV.”

Britons were sleeping or resting eight hours 53 minutes a day on average in September and early October, compared with nine hours and 11 minutes a day in the lockdown, while the amount of time “socialising with friends, family, neighbours and colleagues” rose from six minutes a day to 34.

The survey suggested people were craving to be outdoors after months of confinement. The time spent gardening or doing DIY has dropped from 39 minutes a day in lockdown to 28 minutes but was still far higher than the 16-minute average before the outbreak.

Sales for the UK camping industry rose by almost 40 per cent over the summer compared with last year, after restrictions were lifted, but revenue at hotels and other short-stay accommodation fell. “We clearly went mad for camping,” Jonathan Athow, the deputy national statistician, said.

The ONS added: “Some of this may be down to people deciding to holiday in the UK because of international travel restrictions and the possibility of having to quarantine. Other types of accommodation, such as hotels, remained depressed, suggesting that people may have believed it would be easier to socially distance on a campsite than in buildings.”

The ONS analysis showed that parents were working harder than ever in September and early October. Before the crisis parents spent an average of 201 minutes on paid work a day. That fell to 177 minutes in the spring lockdown, when many parents were home schooling, but rose to 231 minutes in October.

“The increase in paid work for parents was almost fully driven by time spent working from home, showing an increase by 90 per cent on an average day across the week,” the ONS said.

“By October, men spent 18 minutes less on an average day doing unpaid household work than they had in lockdown, down to one hour and 40 minutes. Women, on the other hand, perform a similar amount of household work as during the first national lockdown; a total of two hours and 44 minutes a day. However, women are spending 24 minutes less on such chores than before the pandemic.”

The survey also found that after lockdown those with the highest incomes increased their time working from home while those with lower incomes worked away from home more.