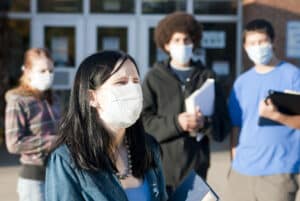 Boris Johnson is facing increased pressure from cabinet ministers and scientific advisers over the reopening of schools as more than 40,000 coronavirus cases were recorded in a single day for the first time.

As the number of patients with Covid-19 in English hospitals exceeded the peak of the first wave, there was new uncertainty for parents after the government confirmed yesterday that the plans for primary schools to reopen next week along with Years 11 and 13 were under review.

The Times has been told that Matt Hancock, the health secretary, and Michael Gove, the Cabinet Office minister, suggested at a meeting hosted by Downing Street that the reopening of schools might have to be delayed.

Mr Gove said that the school term could be extended into the holidays to compensate for any delay. Gavin Williamson, the education secretary, argued that the government should stick with its plans amid concerns that disadvantaged pupils would fall further behind. The prime minister is understood to want to push ahead with the reopening of schools and has asked officials to draw up more “vigorous” plans for mass testing. Teachers could be added to the priority list for vaccines.

Ministers are increasingly alarmed by the spread of a new strain of coronavirus. The Sage group of scientists told ministers shortly before Christmas that a third national lockdown, including the closure of primary and secondary schools, could be required. Even those measures might not be enough to slow the spread and stop hospitals from being overwhelmed, they said.

NHS England said yesterday that the total number of hospital beds occupied by coronavirus patients had risen to 20,426, higher than the previous peak of about 19,000 in April.

The government said that there had been a further 41,385 laboratory-confirmed cases of coronavirus in the UK, bringing the seven-day total to 256,220 — a rise of more than 25 per cent on the previous week. It is the first time that the number of daily coronavirus cases has risen above 40,000, although there has been a significant increase in the number of tests being carried out since the first wave.

One of the country’s biggest teaching unions called on the government to delay the reopening of schools. The NASUWT wants remote learning for all pupils in areas with the highest level of coronavirus restrictions, except for those who are vulnerable or the children of key workers. However, Robert Halfon, Tory chairman of the education select committee, said: “The government should do everything possible to keep schools open. You have to balance the risk of Covid against the risk of loss of academic learning.” Some 1,500 members of the armed forces will provide support to schools and colleges as they test students next term, the Ministry of Defence announced last night.

The government is expected to announce tomorrow that millions of people living in the northeast and northwest will be moved into Tier 4, the highest level of restrictions.

Pepe Di’Iasio, head teacher of Wales High School, near Sheffield, called for better guidance. “We are not public health experts,” he said.

About 450 of his 2,000 pupils are to return next Tuesday but he expects the goalposts to change. He is concerned about pupils coming to school on buses with classmates, only to test positive on arrival. “So we’ll have to make sure they get home safely — not on public transport,” he said. Three of the staff have tested positive.

“We were all hoping that today we would receive some certainty from the education secretary,” he said. “Instead we got more uncertainty from Michael Gove.

“[Tomorrow] I’m meant to be writing letters to our staff, the parents, our governors, telling them what we are going to do. Right now, I’ve no idea what those letters will say.”