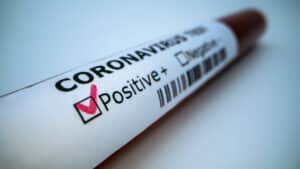 Police officers are unlikely to be given access to people’s medical records to help them enforce lockdown restrictions, a cabinet minister has said.

There is concern in government about the proportion of people who do not self-isolate after they test positive for coronavirus.

Leaked documents suggested that police officers might be notified about individuals who test positive but George Eustice, the environment secretary, said this morning that the government had already introduced “very draconian measures”.

Mr Eustice said that the public had “by in large” abided with lockdown restrictions and that it was unlikely that the police would be given access to medical records.

The proposals, dated January 19 and seen by The Guardian, also included the idea of £500 payments for anyone testing positive for coronavirus. Ministers are trying to solve a problem that scientific advisers have long said is an obstacle to controlling the virus. Paying all those with a positive test to stay at home could cost £2 billion a month. However, the payment could be limited to those who cannot work from home.

Ministers are due to discuss the issue next week but an overhaul of financial support seems imminent. The present payments system has been blamed for prolonging the pandemic by forcing infectious people to go to work.

“We’ve had to introduce some very draconian measures during this pandemic,” Mr Eustice told BBC Radio 4’s Today programme. “The public by large have abided by them, and everybody’s played their part. There’s always a small minority of people who don’t. Therefore the police have to have those enforcement powers. Whether that actually extends to sort of understanding people’s medical records I think is unlikely to be honest.”

Mr Eustice did not rule out the prospect of £500 payments, saying that the policy was “under review”. Officials in the Treasury have distanced themselves from the proposals.

Cabinet Office surveys suggest that only 17 per cent of people with symptoms are coming forward for testing, and the government document says: “Wanting to avoid self-isolation is now the single biggest reported barrier to requesting a test.” Only one in four people self-isolates for the full ten days and 15 per cent carry on going to work, according to figures in the paper.

Government surveys stretching back to last summer have found low levels of adherence to self-isolation, with financial hardship and caring responsibilities consistently cited.

Matt Hancock, the health secretary, is said to favour the most comprehensive option of payments to all those who test positive, costing up to £453 million a week. Limiting payments to those who cannot work from home would halve the cost. Restricting them to lower earners would cost just over £100 million a week.

Under the present system low earners receiving certain benefits are eligible for £500 payments if they test positive or are told to isolate as a contact. Those who do not qualify for this payment can ask councils for discretionary £500 grants but the £15 million pot for the scheme began running out last month. Figures this week showed that three quarters of applications were being rejected.

Robert West, professor of health psychology at University College London and a member of the government’s Spi-B behavioural advisory group, said that throughout the pandemic only 20 to 30 per cent of symptomatic people had quarantined fully. “If you look at the countries that have been successful in controlling the virus, they have made it so that people are financially able to self-isolate,” he said.

Maja Gustafsson, a researcher at the Resolution Foundation think tank, said: “The current approach is not fit for purpose with statutory sick pay among the least generous of advanced economies and far too few people eligible for the £500 support payments. Swiftly putting in place a much more universal and generous system will make a real difference to controlling the spread of the virus.”

However, Duncan Robertson, of Loughborough University’s School of Business and Economics, warned: “We need to ensure that people are incentivised to come forward for a test, to self-isolate if that test is positive, and not to become infected to collect the bounty.”

A Treasury source said that the £500 payments were “very unlikely to happen”.

“It’s incredibly expensive and from the evidence it would not fix the problem it is trying to solve — compliance,” the source said.

A Department of Health spokeswoman said: “All local authorities’ costs for administering the Test and Trace support payment scheme are covered by the government, and each authority is empowered to make discretionary payments outside of the scheme.”

Read more:
Medical records ‘unlikely’ to be shared with police for enforcement but lockdown could last until summer