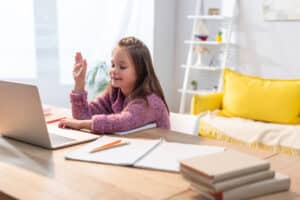 The government has refused to commit to schools being open even after the Easter holidays, raising the prospect that parents will have many more weeks of homeschooling before even a phased return of most pupils to the classroom in England.

A senior government source cautioned that although the data was starting to show signs of a slowing of infections, rates were not falling nearly as sharply as had been expected. The source said the picture had become “more pessimistic” over the past week about the government’s ability to ease any measures in the short term.

Discussions are under way in the Department for Education to decide which pupils could be prioritised, with early years and those facing exams in the summer among those who could be brought back first. Attendance rotas could also be introduced to keep numbers down in schools, but allow for more face-to-face teaching.

The chair of the education select committee expressed dismay at the delay, urging ministers to put “the whole engine of the state” behind paving the way for schools to reopen.

Robert Halfon said parents would be alarmed by the latest indications especially because of the advances made by the vaccination programme.

“The whole engine of the state must do everything possible to get our schools open after half-term as was originally proposed,” he told the Guardian. “If it means priority vaccinations for teachers and support staff then it is worth it because despite the efforts of individual teachers and support staff who are doing their best we are facing an epidemic of mental health problems and educational poverty.

“This is putting enormous pressure on parents and families, many of whom have to give up their livelihoods to look after their children at home. With all the laptops in the world, you still need motivation from parents and when they are working that is very hard, especially with younger children.”

Geoff Barton, general secretary of the Association of School and College Leaders, said reports that children will not be back in school until after Easter did not reflect discussions he had been having with government. “At a time when we are worrying about the mental health of young people, the last thing we need now is no one back in school till after Easter,” he said.

Conservative MPs are expecting to increase pressure this week for ministers to design a clear roadmap for the easing of restrictions once the majority of the most vulnerable have had their first doses of the vaccine in early March. The former minister Steve Baker, one of the leading figures in the Covid Recovery Group of MPs, said public compliance could not be expected indefinitely with no hope in sight.

Downing Street and the Department for Education are expected to examine the data this coming week before making a judgment, with one option including a limited phased return of some pupils.

The education secretary, Gavin Williamson, who has said schools will be given a minimum of two weeks’ notice to plan a return of pupils, is hoping to be able to give teachers and parents an update on the roadmap for schools’ return this week.

However, it is now believed the majority of pupils will not return until at least Easter, despite previous government aspirations that schools could begin to allow pupils to return from February half-term.

The latest government figures for the rollout of the vaccine programme across the UK showed another record day, with 491,970 people receiving their first dose, taking the total to more than 6.3 million. A further 610 people have died within 28 days of testing positive for Covid-19 as of Sunday, bringing the UK total to 97,939.

The health secretary, Matt Hancock, told Sky News that any easing of lockdown restrictions was a “long, long, long way off” and said the UK was still in a dire situation. “You can see the pressure on the NHS – you can see it every day.”

Hancock refused to commit to either mid-February or after Easter as a point for schools to reopen fully to all pupils.

“We’re really clear we want to get schools back and as safe as we can, but we have to watch the data,” he told the BBC’s Andrew Marr Show.

“Of course I hope schools go back after Easter and the vaccination programme is going fast. But we’ve got to make sure that we get the cases down and we’ve got to protect the country from new variants coming in from abroad.”

Baker, who is deputy chair of the CRG, which has previously led parliamentary rebellions against lockdown measures, said: “Covid causes death and serious harm and we must control it, but these lockdowns, restrictions and school closures are causing untold damage to people’s health, livelihoods and prospects.”

He said that the top four risk groups should have immunity by 8 March and at that point “the government should start easing the restrictions in a way that is safe and proportionate. But the public need to hear today what the plan for easing restrictions is.”

Baker said it was “not enough to expect public compliance with prolonged severe measures, without giving some hope, and showing some optimism and light at the end of this very dark tunnel.”

A source in the Department for Education said Williamson wanted pupils “back as soon as possible” but did not deny that a delay until after Easter was possible.

Williamson said as recently as last Thursday that he would “certainly hope” schools would be able to reopen before Easter, though those remarks were not endorsed by the prime minister’s spokesperson, who said it would be guided by the data.

Around 14% of pupils, who are either vulnerable or the children of key workers, are already attending schools. Numbers could be built up gradually, with the youngest seen as a high priority for returning to class, as well as those who have been preparing to sit GCSEs and A-levels this year. The full exam series has been cancelled and the exam regulator Ofqual is now consulting on how pupils will be assessed.

A Department for Education spokesperson said: “We continue to keep plans for the return to school under review and will inform schools, parents and pupils of the plans ahead of February half term.

“The government remains committed to supporting young people’s education, including providing 1.3m laptops and tablets for those who need them, as well as partnering with mobile data companies and online education resource providers. We will continue to work to reopen schools as soon as possible.”