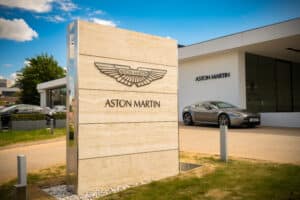 Revenue at the luxury automaker also collapsed, falling 38 per cent from £980m to £610m.

On the operations front, Aston Martin said that the launch of the DBX SUV model had been a success, adding that the Valkyrie was on track for delivery in the second half of 2021.

This would bring in around £2bn in revenues, and earnings of £500m, Aston Martin said.

Looking to 2021, the car firm said that it was forecasting 6,000 sales, with most of its earnings weighted to the second half of the year.

Today’s results are the first since the luxury brand announced that Mercedes-Benz would take a 20 per cent stake in the firm back in October.

The deal was the latest step in new owner Lawrence Stroll’s attempts to turn around the troubled carmaker, which has seen its shares struggle since first listing in 2018.

However, the Mercedes agreement caused a surge of support for Aston’s stock, which has doubled since the deal was announced.

Despite this, shares are still lingering at just a fifth of the levels they first floated at.

Commenting on today’s results, Stroll said: “2020 has been a transformative year for Aston Martin. Since I became Executive Chairman in April, we have made significant progress to position the company for success to capture the huge and exciting opportunity ahead of us.

“I am extremely pleased with the progress to date despite operating in these most challenging of times. I both welcomed the strong support we received from existing investors and was delighted to attract new investors to Aston Martin through the successful refinancing actions taken during 2020.”