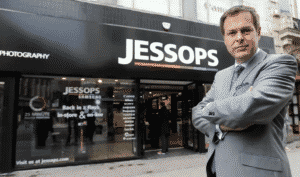 Camera retailer Jessops is to appoint administrators for the second time in little more than a year, in a move that puts 120 jobs at risk.

The business, controlled by Dragons’ Den panellist Peter Jones, said it had filed a notice to appoint administrators after being hit hard by lockdown restrictions. The filing temporarily shields Jessops from creditors and gives it breathing space to find a way for the business to carry on, the company said.

The chain, which Jones’s PJ Investment Group bought out of administration in 2013, has been whittled down to just 17 shops. More than half its stores closed after it hit trouble in 2019.

Jessops is considering a company voluntary arrangement (CVA) – an insolvency process that would enable it to cut its rents. It is also in talks with suppliers and partners. PJ Investment Group is offering to provide additional financial support if management can come up with a sustainable business plan.

A spokesperson for PJ Investment Group said it had worked hard to support Jessops, which had returned to profit in recent years, following a restructuring and multimillion-pound investment. However, they said, the retail business was changing fast “and this process has been accelerated by the impact of the pandemic”.

The company is working with restructuring firm FRP on a rescue plan. However, its stores, including flagships on London’s Oxford Street and in Birmingham, will reopen when government restrictions are lifted next month and the website will continue to trade as normal.

Get the daily email that makes reading the news actually enjoyable. Stay informed and entertained, for free.
Your information is secure and your privacy is protected. By opting in you agree to receive emails from us. Remember that you can opt-out any time, we hate spam too!